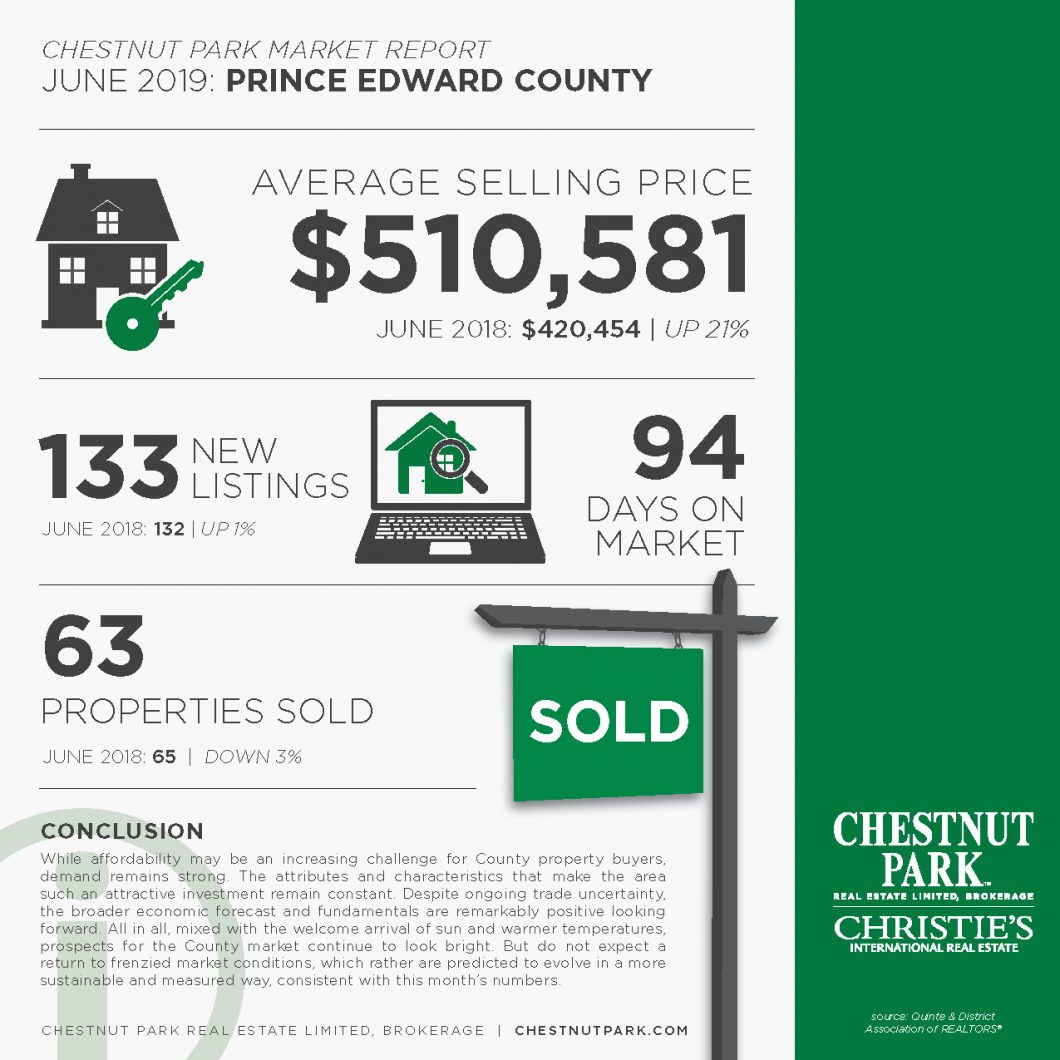 As anticipated in May’s market report, the Prince Edward County (“the County”) real estate market did come alive in June with the long awaited sun and warmer weather that has been so slow in coming this year. While waterfront properties are still contending with record high water levels, the rest of the County appears to be settling into table sustainable market conditions that were predicted for this season.

According to the statistics released by the Quinte & District Association of Realtors® (“the Board”), June came in remarkably consistently with the pace of sales and listings experienced last year. It is fair to say, however, that demand for property in the market remains very strong and the ever rising average and median sales prices reflect that, which in an of itself also acts as somewhat of a suppressant or deterrent to any return to the overheated conditions of 2017. Financing costs and increasingly expensive list prices are prompting some buyers to push the pause button, or to at least carefully deliberate, and do their due diligence to ensure that the potential purchase fits within their budget before taking the plunge and purchasing a County property. As mentioned in earlier reports as well, sellers remain very tenacious with their list price, and are unwilling to part with their property for much less than their expectations, given the impressive sale prices they witnessed on neighbouring properties over the last year or two.

In June, virtually the same number of properties came onto the market as they did this month last year, specifically 133, one more than in June 2018. June’s numbers bring the total of new listings year to date to 503 which is 40 fewer than last year at this time, a 7% shortfall. The total number of properties available for sale at month’s end was 586 which marks a 15% increase over last year’s inventory when 508 were recorded as being available. This is both consistent with, and reflects, the effect of the lower number of sales negotiated thus far this year.

In June, however, sales activity did pick up as stated, and 63 properties were reported as sold, which is only 2 fewer than June of last year. This marks only a negligible decline of 3% year to date. Due in part, however, to the harsh winter and late spring, as well likely to higher prices, carrying costs and qualification requirements, sales year to date remain down approximately 12%, coming in at 193 compared to 219 at this time last year.

But, as mentioned, ongoing strong demand and reasonably tight market conditions, particularly as it relates to well priced properties that reflect value, continue to push prices higher in their upward trajectory. Indeed, the average sale price for properties that sold across the wards that make up the County was well over half a million dollars, specifically $510, 581. This marks a significant year over year increase of over 21%. The median price, reflecting the midpoint of property sales in the County also showed impressive gains, calculated at $385,000 compared to $355,000 one year ago.

As indicated, with trends like these and stubborn sellers insisting on their price and buyers forced increasingly to crunch the numbers, deals are taking longer to occur. In fact, the numbers paint an interesting picture, illustrating clearly that buyers are taking longer to land their properties of choice and negotiate a deal that is both acceptable to sellers and makes sense to them. In June, the average days on market for properties that sold was 94 days which is over twice as long as it was one year ago when the average property took only 44 days to sell.

While affordability may be an increasing challenge for County property buyers, demand remains strong. The attributes and characteristics that make the area such an attractive investment remain constant. Despite ongoing trade uncertainty, the broader economic forecast and fundamentals are remarkably positive looking forward. All in all, mixed with the welcome arrival of sun and warmer temperatures, prospects for the County market continue to look bright. But do not expect a return to frenzied market conditions, which rather are predicted to evolve in a more sustainable and measured way, consistent with this month’s numbers.